It’s almost May and time to roll out some plans for fan and charity events leading up to The World’s Greatest Race! It’s Kevin, pinch hitting for Jackson (since I don’t have a blog site and he’s busy testing this week) to make a couple of announcements. We’re combining some Indy 500 fan events through the radio show, “Trackside” on 107.5 The Fan with some of Jackson’s charity-based partners and efforts to raise money for great causes.
The Burger Bash returns! On a different night from a new location – Monday May 23rd from 6-8:30 pm at USAC headquarters at the corner of 16th and Main St in Speedway, just a few hundred yards from the Indianapolis Motor Speedway. This will kick off race week and again be a free event and feature Indy 500 drivers, USAC drivers and a few Road to Indy drivers – certainly at least one ;. The 7-8 pm portion will be simulcast on 93.5/107.5 The Fan as a live edition of “Trackside with Curt Cavin and Kevin Lee”.

The event will benefit Jackson’s primary sponsor, the IU Simon Comprehensive Cancer Center & raise money and awareness for cancer research. Prime 47…Indy’s Steakhouse will serve as the event title sponsor by making a significant donation and selling burgers with proceeds going to the Cancer Center. They will also provide a buffet to our VIP guests who will have inside access through a $100 donation while tickets last. Basic Needs, Simple Solutions will also benefit and help coordinate logistics and donations to the Cancer Center. The Indy Brew Bus will be selling beer and wine with a portion benefiting the Cancer Center and providing refreshments to our VIPs. Other partnership programs are available, including assets from Jackson Lee Racing. Contact us at JacksonLeeRacing@gmail.com for more info.
There will be a silent/live auction with racing related experiences and memorabilia including a 2-day formula car driving experience and racing school with the Lucas Oil School of Racing (where Jackson began) and include simulator coaching from Jackson, an Indy Racing Experience 2-seater ride at IMS, a bottle of Van Winkle Special Reserve 12 yr Lot “B” Kentucky Bourbon Whiskey + assorted memorabilia, prints and at track experiences. A raffle for smaller prizes will also be included. To purchase limited VIP tickets, make a $100 donation here: Donate – Basic Needs, Simple Solutions (basicandsimple.org) and then email either me at Kevin@indy.emmis.com or Mark Lynch at mark@basicandsimple.org to let us know the donation is for The Prime 47 Indy Burger Bash. Or, contact us directly first.

For those not familiar with the “Burger Bash”…In 2008, “Trackside” co-host Curt Cavin created an event for his readers at the Indianapolis Star. The event was held on the Friday night before the Indy 500 (after the final “Carb Day” practice) and allowed fans to gather to share their love of racing and a good burger. His radio co-host, Kevin Lee, and a couple of hundred fans attended the event at 96th Street Steakburgers with one guest, Scott Dixon, who won the Indy 500 two days later. Starting in 2009, the event was simulcast on The Fan and the guest list and attendance grew. By 2016 and 2017 the event had moved to Pan Am Plaza with a title sponsor (Steak & Shake) to cover costs and provide funds for charity and attracted well over 2000 fans and over half of the Indy 500 field. Over 10 years, over $200,000 was raised for various charities through the Burger Bash. The event has been on hiatus because of scheduling conflicts since 2018. 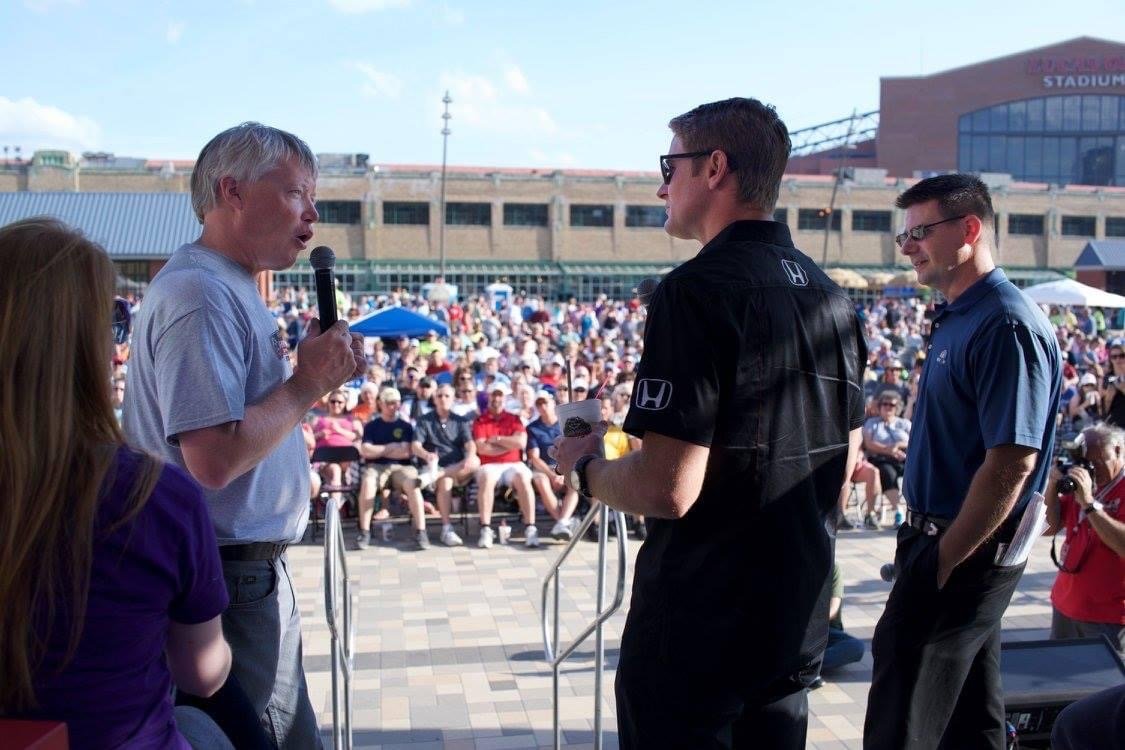 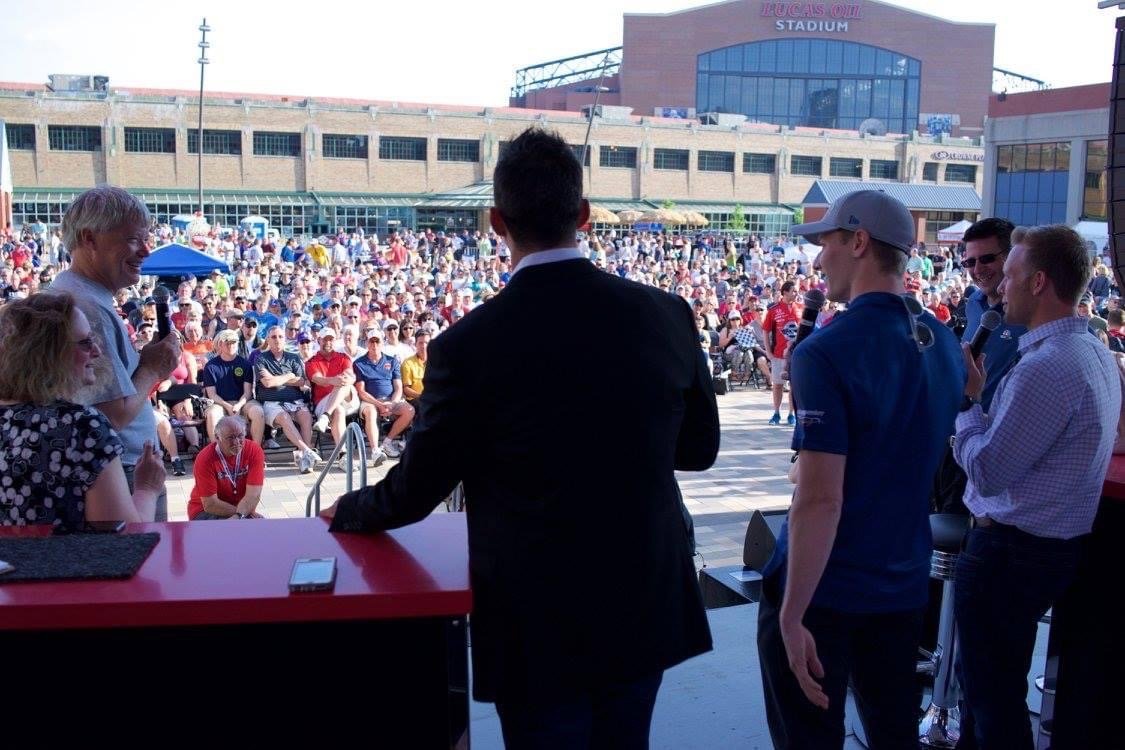 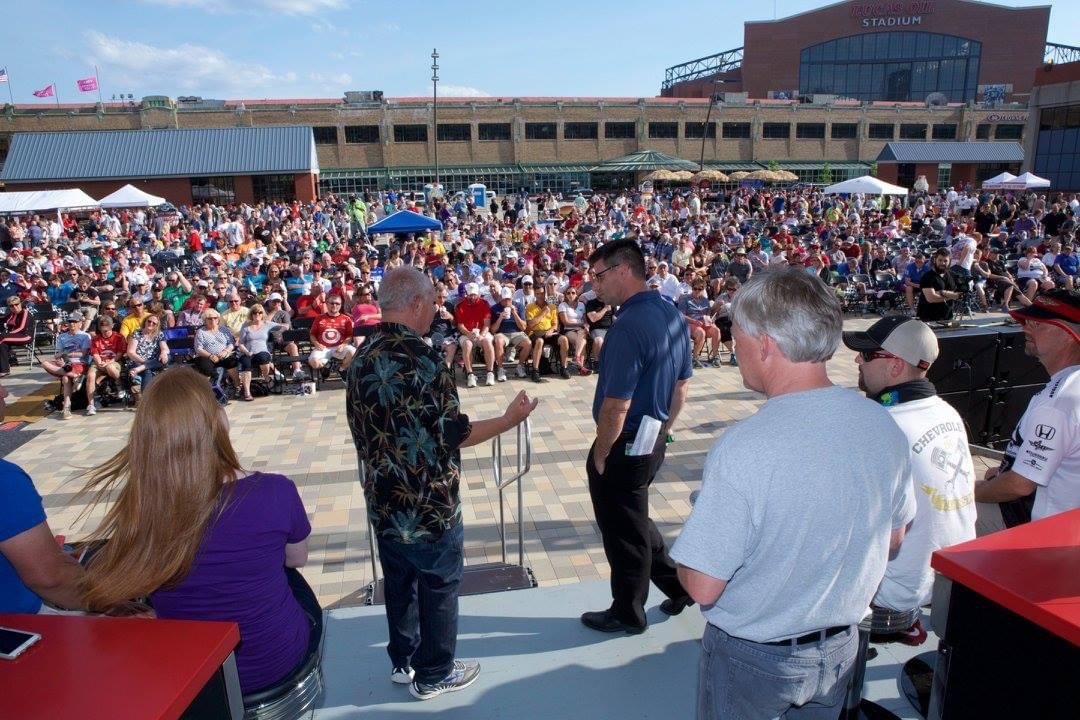 And, the reason it’s not on Carb Night…Jackson will again be racing that night at Lucas Oil Indianapolis Raceway Park in nearby Brownsburg. So, for fans only coming in for Indy 500 race weekend – we’ll host the Carb Night Pre-Race Party in the Midway at IRP from 5:30-6:30 on Friday May 27th. We did this last year and it poured down rain, but we still had a nice gathering. We’ll hope for better weather and a bigger crowd this year. We’ll tape that night’s “Trackside” show to air at 7pm and talk with several Road to Indy drivers, including some from Indy Lights and likely a couple of IndyCar drivers or other special guests. Mostly, this will be a chance to gather informally to kick off race weekend and set the stage a final time. A race ticket will be required, but I’ll soon have a link for a discount. 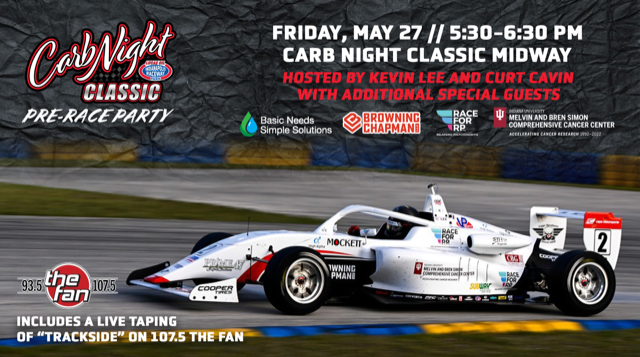 For those asking, a new version of Jackson Lee Racing t-shirts will be available at both events with proceeds benefiting the IU Simon Comprehensive Cancer Center and Race for RP, which raises money and awareness for Relapsing Polychondritis (RP) and all autoimmune diseases. We’ve got another mini event to announce soon to benefit Race for RP!
In the meantime, “Trackside” airs each Tuesday from 7-9 and nightly from 7-8 in May and will include updates and an early chance to bid on items. It’s available as a podcast and live streaming at www.1075TheFan.com